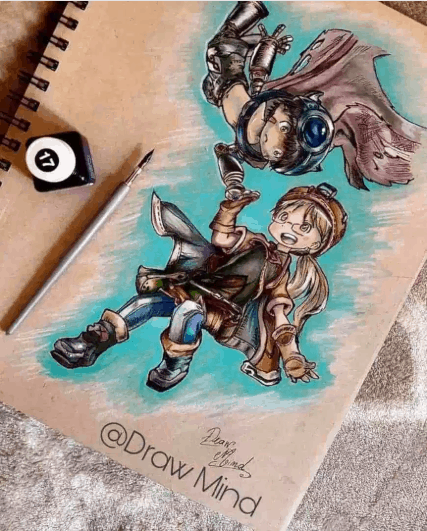 With Made in Abyss, manga artist Akihito Tsukushi gave us something to remember him by in 2017.???

A conceptualized storyline expressed in impeccable illustrations pushed both the anime and the manga to the top of the charts by the time the year bade us farewell. There was no denying Tsukushi’s knack for powerful storytelling and hauntingly life-like character developments. ?

Come 2018 and fans cannot await the release of the two compilation films titled Made in Abyss ?: Tabidachi no Yoake (Journey’s Dawn), and Made in Abyss: Hōrō Suru Tasogare (Wandering Twilight) announced earlier this year and the much-anticipated sequel whose production is underway. Meanwhile, they can treat themselves to Tsukushi’s latest work as a character designer for a virtual reality corporation HIKKY, a 3DCG character called “Mokuri”?‍♂️.

Japanese website “Comic Natalie” reported this news along with a complete blueprint sketch of the character. From what we see, Mokuri clearly bears resemblance to Nanachi’s Narehate-form?, complete with blonde flaky flicks falling over bottle green eyes, a furry body, and paw-like limbs. In the “Made in Abyss” universe, Narehate are creatures reduced to a deformed version of their human bodies after they survive the 6th layer’s curse. Nanachi meets her Narehate fate together with her close friend Mitty when both of them are forced into a capsule and lowered into the 6th layer of the abyss by Bondrewd, a ruthless researcher of its depths.?

By: Made In Abyss Creator

Viewers will recall this as one of the darkest scenes to feature in the anime’s first season that had a 13-episode run from July 7th to September 29th, 2017. The manga itself has been serialized on Takeshobo’s Web Comic Gamma website since 2012. California-based publishing giant Seven Seas Entertainment licensed the manga at the Anime Expo 2017 and released its first volume on January 23, 2018.

Mokuri is a part of HIKKY’s larger project with acclaimed art director Emika Sawa titled “Mokuri Project” . HIKKY plans to release a finalized avatar of Mokuri along with some modifications to the original design as a 3DCG model sometime later this year.  As of now, Mokuri’s fate-at-large as a 3DCG character needs to be seen❔. This skepticism comes in the wake of a strong wave of criticism doing rounds for 3DCG anime in general due to their poorly-finished forms✖️, as opposed to the traditional 2D illustrations. The anime community was quick to point out such flaws in dark-fantasy anime “Berserk” hopping onto the 3DCG bandwagon in 2016.

Will Tsukushi fall prey too or will he leap to the other end of the 3DCG abyss remains to be seen.

Watch out for more information on the finalized avatar and its date of availability on HIKKY’s and Tsukushi’s official Twitter accounts. ??