With the recent release of Evangelion 3.0 + 1.01 on Amazon Prime, a lot of new people are getting into the series. So I decided to make an article about stuff that the series doesn’t tell you outright. It is a lore article, something that I haven’t done before so I hope I get my point across well.

For this article, I am sticking to the Series and End of Evangelion continuity. Since the series and EoE have the same incidents up to the end, unlike the movies. I will do another article for the Rebuild Movies next week.

If not clear already, we will be knee-deep in spoilers.  I recommend that you watch the series and EoE first, come back to this article rewatch both again, and then move on to Rebuilds. That way you will be able to make more sense of the Rebuild movies. It is important to mention that the Rebuild movies share the exact same incidents with the Series and EoE up until the Second Impact.

So let’s start from the beginning.

The First Impact took place in prehistoric times. A huge spherical object called, the Black Moon collided with earth. In Evangelion verse, it was this impact that launched matter from Earth creating our only moon. The Black Moon carried Lilith and a Seed of Life sent by the first Ancestral Race but, Lilith wasn’t meant to be on earth. As Adam, another one of her kind was already here with another Seed.

It was the Ancestral Race’s rule that one planet will only have one Seed of Life. Hence in situations like this, they had Lances of Longinus capable of disabling the Seeds. Lilith lost her Lance during the crash hence, Adam had to be one to use it causing Lilith’s Seed to populate the earth and robbing Adam’s children of their home. Humans are offsprings of Lilith and the Angels are offsprings of Adam.

The White Moon carrying Adam had landed in Antarctica where the Second Impact occurred. Lilith and the Black Moon landed in modern-day Japan.

~Earth after the Second Impact (Screenshot from Rebuild 2.22 for better resolution)

This is where stuff becomes crazier. The second Impact sets the series in motion. The world changes a lot after the Second Impact. It killed more than half of the human population and almost wiped out all other species.

The Second Impact happened in Antarctica after Dr. Katsuragi (Misato’s father) and his team found Adam and his Lance of Longinus. They attempted to merge human DNA with Adam; this resulted in Adam waking up. He generated a massive Anti AT Field which resulted in a massive explosion. The explosion instantly killed over 2 billion and melted all the polar ice caps. This resulted in increased sea levels worldwide killing countless other humans.

This truth wasn’t told to the world. The world thinks that Second Impact was caused by a meteor. The world went into complete chaos after this, with wars and conflicts breaking out all over the planet. When all this eventually came to end, the Majority of the power in the world was held by the UN. The only major countries remaining were China, the US, Germany, and Japan.

A secret organization known as SEELE was the one pulling strings behind the increased influence of the UN. SEELE was also behind the Second Impact, through this cataclysm they managed to reduce Adam into a more manageable state. This is all because they want to fulfill the prophecy of Human Instrumentality written in the Dead Sea scrolls. By reducing Adam, they also ensured that his offsprings the Angels wouldn’t have any contact with him.

SEELE created an organization Gehirn under the UN, which is supposed to stop a possible Third Impact. SEELE wishes for a Third Impact to facilitate their desires though. The human Instrumentality project would merge all human beings into a single “perfect” life form. If any one of the 17 Angels managed to fuse with Adam or Lilith, humanity would be exterminated.

This occurs at the ending of the Series and EoE timeline. The Rebuild timeline version of this event is called Near Third Impact. N3I is drastically different from this Third Impact. Another thing I’d like to point out is that the series shows us what happened in Shinji’s mind while EoE also shows what happened in the outside world.

At some point, Gehirn discovered Lilith and built the Geo Front and the fortress city of Tokyo -3 around it. They renamed their organization NERV at this point and began working on Project E. Project E of course refers to building Evas in the image of Adam to fight the Angels. Under commander Ikari Gendo, Eva Unit – 00, Unit – 01, Unit – 02, Unit – 03, and Unit – 04 were built.

Only the first 3 saw combat against Angels as Unit – 03 was destroyed when it was possessed by the 13th Angel. And Unit – 04 was destroyed when NERV’s 2nd branch in Nevada disappeared. Unit – 00 was later sacrificed to defeat the 16th Angel. Eventually, all 17 Angels were defeated but all 3 of the pilots were in shambles.

Shinji couldn’t get over the guilt of killing Kaworu, Asuka was in a coma because of the psychological attack of the 13th Angel and Rei was getting used to her new “body”. Gendo was asked to surrender Unit – 01 as it was the only Eva born from Lilith and not Adam. Lilith herself could not be used as the Lance of Longinus was in space after the fight with the 15th Angel. Gendo refused to cooperate.

When activated, Unit – 01 generated an AT Field in form of wings and rose to the sky. The real Lance of Longinus comes back from the Moon and stops inches away from the throat of Unit – 01. At this point, the mass-produced Evas use their replicas of Lance of Longinus and crucify Unit – 01 and impose the Stigmata of Christ on its hands. Now the Mass Produced Evas overload their S2 engines representing the Sephirotic Tree of Life which represents the 10 aspects of creation from the Kabbalah tradition.

Fate of the world

Finally, Gendo brings Rei to the Terminal Dogma to merge with Adam and start the Third Impact to begin the Third Impact on his terms and reunite with Yui. Rei absorbs Adam and then Lilith absorbs her. Lilith becomes a giant Rei and chooses Shinji instead of Gendo. The fate of the world rests in Shinji’s hands now. Here is where the series and the End of Evangelion endings differ.

EoE and the Series have a different Ending 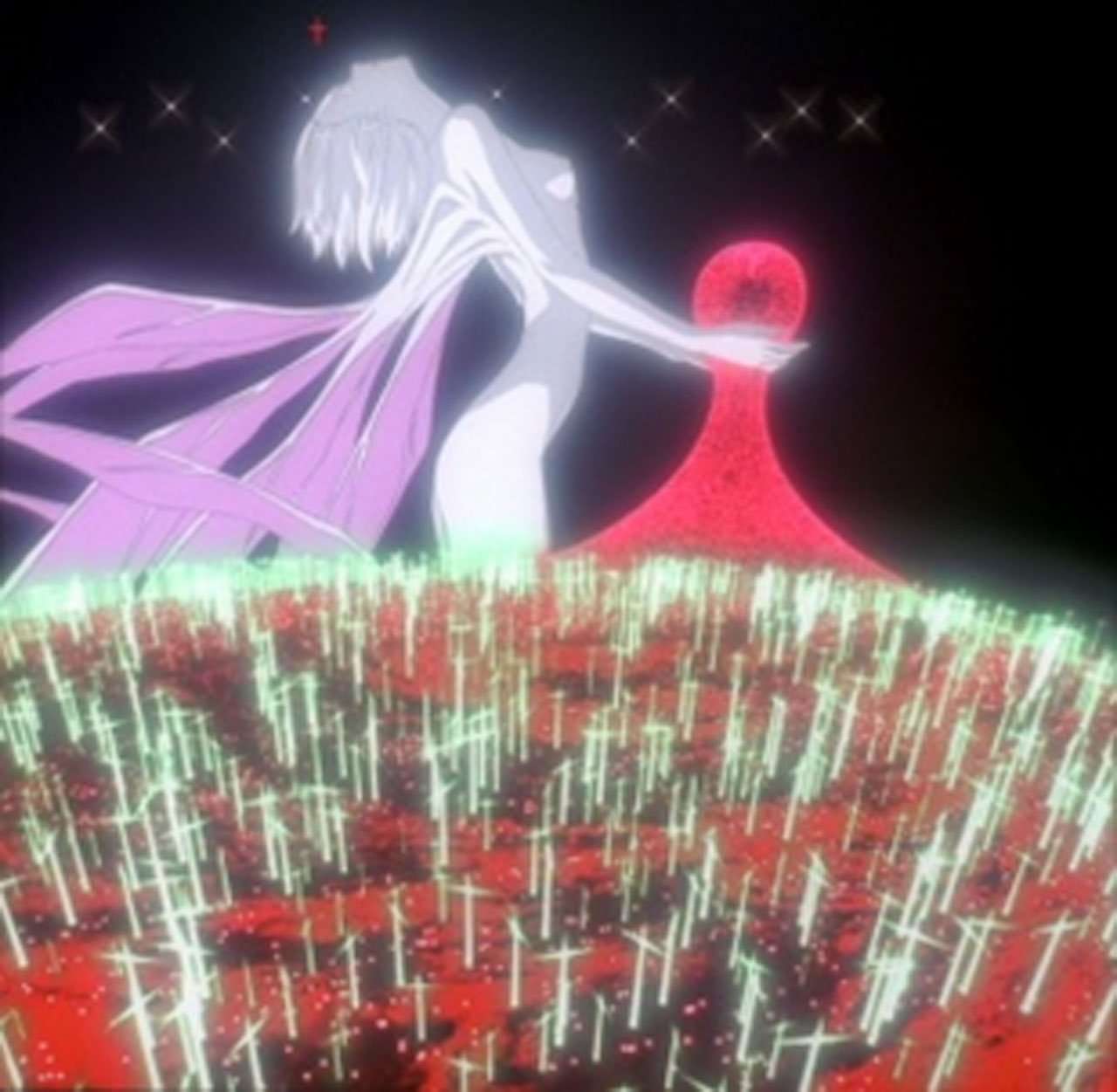 This may not be that apparent in the first watch but this is true.

In the Series ending, Shinji sees visions of other characters talking about him in a positive light. The animations grow simpler and simpler the deeper Shinji goes into his consciousness. Shinji realizes that getting hurt is a part of life and that everyone suffers. The animations kick back in one last time to show everyone clapping as Shinji realizes this. This ending saves humanity.

In the EoE ending, Shinji refuses to grow up. This is accompanied by visions of Asuka and Misato scolding him and telling him the harsh truths. Here, Shinji’s pain grows even more. His escapist tendencies overtake him and he decides that all of humanity should perish along with him. You may think he learned something but the first thing he does when he sees Asuka on the beach is trying to strangle her. This ending starts a loop dooming Shinji and all the cast to fail again and again. This loop also makes all Evangelion timelines cannon and eventually leads to the Rebuild timeline where the story finally ends.

That is all I have for now. Oof…this article took a lot out of me. Seeing the word count, this is easily the longest article I’ve ever done. Let me know your thoughts down in the comments. I am taking my leave here. My hands are really aching from all the typing. See ya!