A lot of prayers were heard of people, including mine were heard. Finally, after eight years, Hataraku Maou Sama season 2 was confirmed this Saturday again, increasing the number of sequels rolling in this year. Now there are no airdates confirmed, but I hope we see it sometime this year to make this year even more ridiculous for anime fans. It is one of the most underrated anime ever. It is one of the rare reverse isekais. I made a list of the most underrated anime of all time; do check it out to find some hidden gems of the industry that hot ignored due to some reason. But for now: 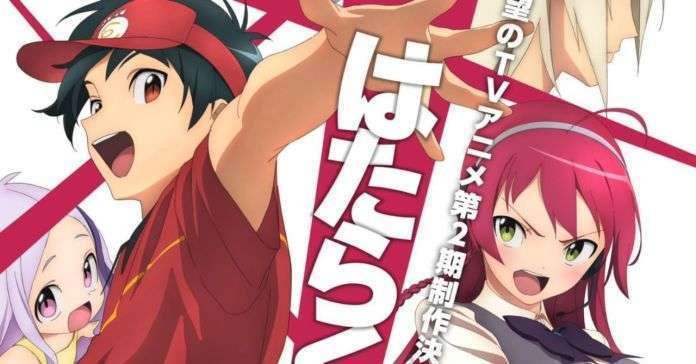 What is known about the new season?

Before getting into that, let me recap the plot of the 1st season real quick here. So there’s this all-powerful demon lord of a world called Ente Isla; he tries to conquer the world but is defeated by the human hero Emilia. He then escapes through a portal with his right-hand man, Alsiel. The portal leads him to modern-day Tokyo. They both lose their powers and manage to guise themselves as humans. The demon king takes in the name Maou Sadao (yes, pun wholeheartedly intended) and works at McDonald’s to earn money for their living. He finds out that Emilia also came to this world. They somehow come to peace with Emilia, observing him as much as possible to make sure he does not go wild.

So there is very little information about the sequel right now except that all the season 1 cast are reprising their respective roles. They just announced it this Saturday (which is “yesterday” at the time of writing) at the Light Novel expo. Let us be thankful that this old anime is being given another chance. They gave us an announcement PV (which I will link below) containing some old and some new scenes. It took quite a while, but finally, we are getting a sequel of this series.

This is an exciting anime; it balances action and comedy quite well. It is a good investment of your time, especially if you watch anime to relax after a long day of work or study session. Another good thing about this anime is that this does not need much world-building because it is a Reverse Isekai.

I hope this anime comes out to continue the barrage of sequels coming out or announced this year. Not to mention, we are getting unique adaptations of Jujutsu Kaisen, Chainsawman, Shumatsu no Valkyrie, etc. This year. Even further, we have two original anime that look crazy coming right in this April. Do watch this anime if you haven’t already. Tell me down in the comments how excited you are for the sequel. You can check out the announcement clip here and the MyAnimeList page of the 1st season (for a more detailed plot summary) here. This is all I have about this anime right now. When more information is released, I’ll be sure to report back with it. Till then, See ya!!